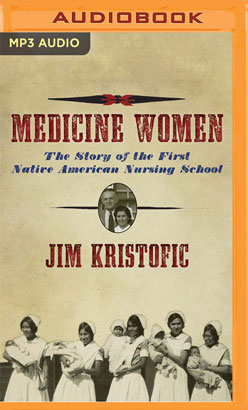 The Story of the First Native American Nursing School

After the Indian wars, many Americans still believed that the only good Indian was a dead Indian. But at Ganado Mission in the Navajo country of Northern Arizona, a group of missionaries and doctors - who cared less about saving souls and more about saving lives - chose a different way and persuaded the local parents and medicine men to allow them to educate their daughters as nurses. The young women struggled to step into the world of modern medicine, but they knew they might become nurses who could build a bridge between the old ways and the new.

In this detailed history, Jim Kristofic traces the story of Ganado Mission on the Navajo Indian Reservation. Kristofic's personal connection with the community creates a nuanced historical understanding that blends engaging narrative with careful scholarship to share the stories of the people and their commitment to this place.

"Jim Kristofic offers a veritable twentieth-century saga of the rise and eventual eclipse of the Presbyterian Mission school, hospital, and nursing program at Ganado against the background of Juan Lorenzo Hubbell's success as an Indian trader in a unique part of the Native world. In telling of the triumphant confluence of missionary dedication and Navajo endurance against the unrelenting pressure of post-World War II change, he offers a moving story equal to the power of Thomas Gray's unforgettable 'Elegy Written in a Country Churchyard.'" (Paul G. Zolbrod, author of Diné Bahane': The Navajo Creation Story)

"The book is a history of the largest medical mission among the Diné (Navajo people), 1902-1969, and its crown jewel, the first Native American nursing school. You'll find herein appealing portraits of mission staff and students, both Diné and non-, and feel the triumphs and failures of an oasis of learning." (Klara Bonsack Kelley, coauthor of Navajo Sacred Places)

Jim Kristofic grew up on the Navajo Reservation in Northeastern Arizona. His award-winning books, The Hero Twins: A Navajo-English Story of the Monster Slayers and Navajos Wear Nikes: A Reservation Life, are both published by UNM Press. He lives in Taos, New Mexico.