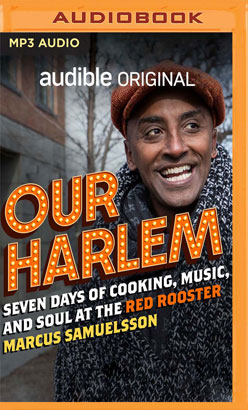 Seven Days of Cooking, Music and Soul at the Red Rooster

To hear Ethiopian and Swedish chef, TV personality, and restauranteur Marcus Samuelsson cook with special guests at the Red Rooster restaurant is to make an audio pilgrimage to Harlem. Listeners will get to know the iconic neighborhood, Marcus' home, through its food, its history, and - most importantly - its people. Special guests join Marcus each day of the week to cook, to laugh, and to share their stories, including Melba Wilson, Jelani Cobb, Bevy Smith, and Kevin Young, to name a few. Our Harlem transports listeners to the hub of African American culture.

Join us when Marcus recreates the short ribs he made at the Red Rooster for President Obama's fundraiser there, and when author Jelani Cobb discusses the lasting significance of the first African American President. Listen to Marcus explore the African and Southern roots of his favorite ingredients with food historian Jessica Harris, and make fried chicken with Harlem's very own Charles Gabriel. And venture out in El Barrio to La Marqueta with Marcus and Harlem native Aurora Flores.