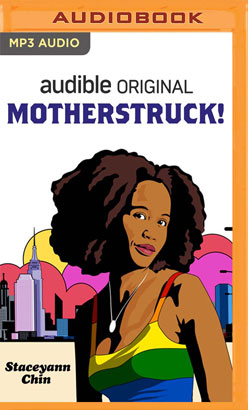 Meet. Love. Break. Recover. That's been the routine of Staceyann Chin's romantic life. But at 35, after yet another devastating breakup and overcome by an urgent and all-consuming desire to have a child, Chin realizes she's running out of time. So she sets her sights on a single target: motherhood.

There's just one problem. As a single black lesbian whose career as a poet and political activist has landed her on Oprah and in The New York Times but left her flat broke and without health insurance, Chin's options are limited. Meanwhile, the Jamaican-Chinese Brooklyn resident can “feel the eggs drying up inside my aging ovaries”.

MotherStruck! is Staceyann Chin's heartbreaking and hilarious true account of her years-long battle to become a parent. Helped on her quest by Peter, a gay man she marries to start an “army of children” and C.J., her supremely supportive brother-in-law, Chin chronicles her struggles to navigate America's broken health-care system, multiple threats of a miscarriage, and weeks of doctored-ordered bed rest while desperately needing to earn a living.

Featuring an original score by Grammy-nominated songwriter Meshell Ndegeocello, MotherStruck! is a triumphant story about the true meaning of parenthood, the many forms that family can take, and discovering what really matters in life and love.