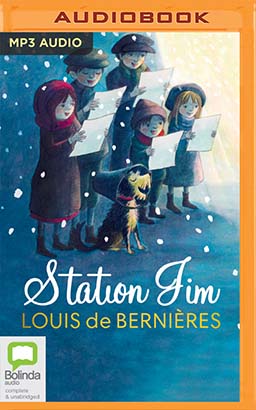 A heartwarming tale about a mischievous dog who works on the steam trains.

One day in autumn, in the days when all the trains were driven by steam, a railway guard found something abandoned on a train…

Mr Ginger Leghorn is used to collecting up umbrellas and other lost property but he’s never found an abandoned puppy on his train before. He has no intention of keeping it but his five children - Alfie, Arthur, Beryl, Sissy and Albert – have other ideas and Jim is soon a much-loved, but often disruptive, member of the family.

Whether it’s his feud with the cat, getting stuck in rabbit-holes, accidentally going to sea, accompanying the children to school or carol singing at Christmas, Jim has a knack of making himself the centre of attention. This little black and tan puppy with its small bright eyes and very waggy rump becomes something of a hero in his town, and even catches the eye of the King himself.

Station Jim is a story for both children and adults.