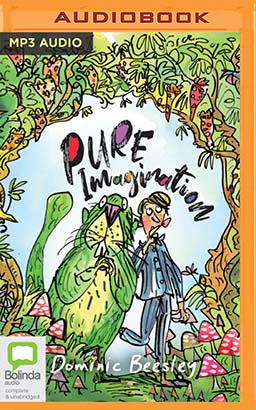 Oswald doesn’t want a new friend either, especially not a book-loving, bed-making, broccoli-eating boy. But when an imaginary friend gets a new assignment, they’re stuck there until the kid no longer needs them. And with Oswald’s home world of Imagination mysteriously crumbling away into nothing, befriending Reggie seems like a safer bet than disappearing with it.

But when Oswald forgets Reggie’s birthday, Reggie runs away to Imagination. A world where a kid’s wildest dreams can come true … as well as their worst nightmares. A world where bugbears lurk in the forest, where sabre-toothed hamsters might be waiting behind a bush and where you can never be sure if the new friend you’ve made can be trusted.

Now Oswald needs to find and rescue Reggie – and fast. Reggie could be the thing everyone’s been looking for to save Imagination – but if they’re not careful, he could be the one to destroy it.