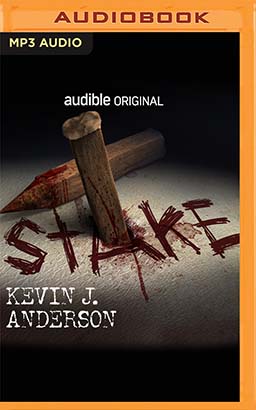 The only way to stop a bad guy with fangs is a good guy with a stake. And Simon Helsing believes he was put on this Earth to do the job. He is on a single-minded crusade to hunt down vampires and kill them in their lairs. But what if vampires aren't real?

The only thing that Detective Todd Carrow believes is that the bodies turning up in Colorado Springs are the work of a lunatic. Are they strange and sadistic gang murders? Or does someone actually believe in the existence of vampires?

Lexi Tarada wants to believe. As a teenager, she had an experience she still can't explain. Now, her website sifts through the bizarre phenomena and the crazy conspiracy theories to find out what is - or might be - real. Who should Lexi believe? The detective on the case of the sadistic murders...or the guy who drives stakes through the hearts of the victims?

As Lexi gets drawn deeper into Helsing's bizarre world, and Carrow follows an increasingly baffling set of clues, fact blends into fiction, and the line blurs between what is imagined and what is real. And that may be exactly what the vampires want.

"Stake is a dark and dangerous tale that is perfect for fans of The X-Files! Devious, twisted, always surprising, and deeply unnerving. Highly recommended!” (Jonathan Maberry, New York Times best-selling author of V-Wars and Lullaby)