Springtime in a Broken Mirror 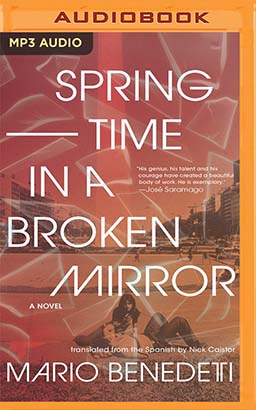 Springtime in a Broken Mirror

“A wise, lonely novel...[and an] honest reflection of exile.” (The New Yorker)

In the tradition of Roberto Bolaño's Savage Detectives, a celebrated classic and heart-wrenching story of a family torn apart by the forces of history, by one of Latin America's most celebrated writers

The late Mario Benedetti's work was often ranked with “such esteemed Latin American writers as Gabriel García Márquez, Carlos Fuentes and Julio Cortázar” (The Washington Post) and his novel The Truce has sold millions of copies around the world. His extraordinary novel Springtime in a Broken Mirror revolves around Santiago, a political prisoner in Uruguay, who was jailed after a brutal military coup that saw many of his comrades flee elsewhere. Santiago, feeling trapped, can do nothing but write letters to his family and try to stay sane.

Far away, his 9-year-old daughter Beatrice wonders at the marvels of 1970s Buenos Aires, but her grandpa and mother - Santiago's beautiful, careworn wife, Graciela - struggle to adjust to a life in exile.

Published now for the first time in English, Springtime in a Broken Mirror tells with tenderness and fury of the indelible imprint politics leaves on individual lives. Generous and unflinching, it asks whether the broken bonds of family and history can ever truly be mended. Written by one of the masters of the Latin American novel, this is the story of a fractured continent, chronicled through the lives of a single family.