Things She Owned, The 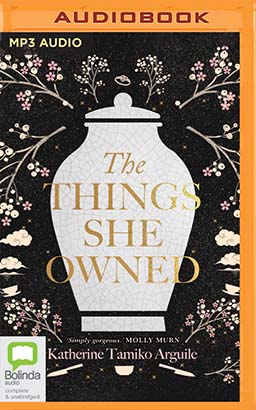 Things She Owned, The

Years after the death of her cruel and complicated mother, Erika is still surrounded by the things she left behind: an onigiri basket, a Wedgwood tea set, a knotted ring from Okinawa. Against her Japanese family’s wishes, Erika has also kept the urn containing her mother’s ashes and bones, refusing to put Michiko’s memory to rest. She ignores her grief, throwing herself into her work as a chef at a high-end London restaurant. But when a cousin announces that she will be visiting from Japan, Erika’s resolve begins to crack.

Slowly the things Michiko owned reveal stories of her youth amid the upheaval of Tokyo during and after the Second World War. As the two women’s stories progress and entwine, Erika is drawn to Okinawa, the island of her ancestors. It’s a place of magic and mysticism where the secrets of Erika’s own past are waiting to be revealed.

Beautiful and mysterious, The Things She Owned explores the complexity of lives lived between cultures, the weight of cross-generational trauma, and a mother and daughter on a tortuous path to forgiveness.