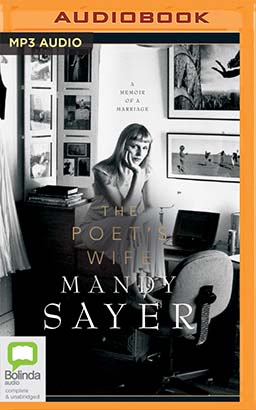 Even though we'd grown up in vastly different cultures and countries, we'd both known poverty, domestic violence and the expectation that neither one of us would ever amount to anything. That was probably what united us more than anything: our shared defiance of that prediction.

She tap-danced on street corners for people's small change. He was an out-of-work university teacher, poet and Vietnam vet. She was white and from Australia. He was black and from the Deep South. They met on Mardi Gras, New Orleans in 1985. She was twenty-two. He was nearly forty.

They fell in love. They married. What happened next will thrill, move, perplex and enrage you. It will break your heart.

The Poet's Wife tells the story of the ten years that Mandy Sayer and Yusef Komunyakaa spent together, first as lovers, then as husband and wife. During that time he became a famous poet, recipient of the Pulitzer Prize, the highest honour for poetry in the United States, and a university professor.

At the same time, Mandy became a writer, winning the Vogel Prize for young Australian writers for her first novel, Mood Indigo. She is now an acclaimed author and journalist and has written two award- winning memoirs, Velocity and Dreamtime Alice. The Poet's Wife traces her life from the end of Dreamtime Alice, and again confirms Sayer's place as one of our most lyrical and most courageous writers - a memoirist like no other.