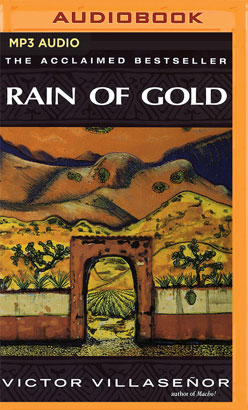 Rain of Gold is a true-life saga of love, family and destiny that pulses with bold vitality, sweeping from the war-ravaged Mexican mountains of Pancho Villa’s revolution to the days of Prohibition in California.

It all began when Villaseñor’s maternal grandmother sat him down in their little home in the barrio of Carlsbad, California, gave him sweet bread and told him the story of their past. Of his mother Lupe, the most beautiful girl in the whole village who was only a child when Villa’s men came shooting into their canyon. And of his father Juan and his family, reduced to rags and starvation as they sought refuge across the border, where they believed that endless opportunity awaited.

Lupe and Juan met and fell in love in California, but they found that the doors to the Promised Land were often closed to those from south of the border. His father was forced to take the law into his own hands, in spite of his wife’s objections. With love and humor, Villaseñor shares this passionate love story that celebrates the triumph of the human spirit.

An all-American story of struggle and success, Rain of Gold focuses on three generations of Villaseñor’s kin, their spiritual and cultural roots back in Mexico, their immigration to California and overcoming poverty, prejudice and economic exploitation. It is the warm-hearted and spirited account of the wily, wary and persevering forebears of Victor Villaseñor.