Haunting of H. G. Wells, The 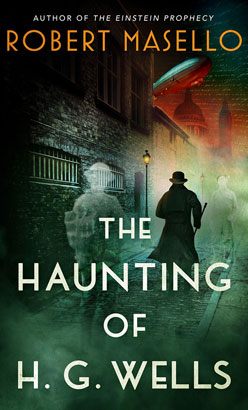 Haunting of H. G. Wells, The

A plot against England that even the genius of H. G. Wells could not have imagined.

It’s 1914. The Great War grips the world—and from the Western Front a strange story emerges…a story of St. George and a brigade of angels descending from heaven to fight beside the beleaguered British troops. But can there be any truth to it?

H. G. Wells, the most celebrated writer of his day—author of The Time Machine, The War of the Worlds, The Invisible Man—is dispatched to find out. There, he finds an eerie wasteland inhabited by the living, the dead, and those forever stranded somewhere in between…a no-man’s-land whose unhappy souls trail him home to London, where a deadly plot, one that could turn the tide of war, is rapidly unfolding.

In league with his young love, the reporter and suffragette Rebecca West, Wells must do battle with diabolical forces—secret agents and depraved occultists—to save his sanity, his country, and ultimately the world.