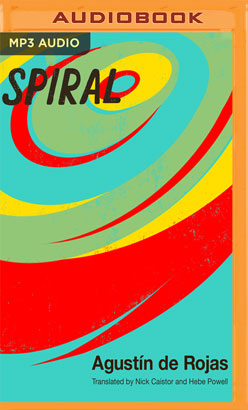 series:A Legend of the Future #3

The winner of Cuba's prestigious Premio David in 1980, Spiral is another magisterial space opera from the late great science fiction author Agustín de Rojas. Deeply committed to the Revolution, Rojas presents a stunning critique of the Cuban regime under Fidel Castro by inviting the comparison of Spiral's fictional moral universe, one in which Che Guevara's principles of socialism are followed to the letter, with the brutal realities of everyday Cuba.

Decades after the devastating Catastrophe, Earth has become a radioactive wasteland sparsely populated by bands of genetically modified humans struggling to survive on limited resources. An expedition of 10 explorers from the Aurora planet returns to this desolate landscape to investigate the mysterious causes of its destruction. But when an unexpected guest breaks into their base, the team needs to wield all of its brain power not only to make sense of the helpless planet but also to stay together as a community.

Spiral is a compelling novel concerned with the ethics of scientific exploration and the human relationships caught up in it. Weaving biology, ecology and sociology into this sci-fi narrative, Agustín de Rojas manages to paint a devastating picture of a planet torn apart by two irreconcilable economic powers that so closely resemble the Cold War context in which the story was published.

The novel is very meticulous in its exploration of the professional dilemmas of this crew of scientists and explorers who need to stay true to the utopian values that made the journey possible. Yet it is their emotional responses as human beings that elevate the plot and make Spiral a captivating tale of endurance and curiosity for contemporary audiences.