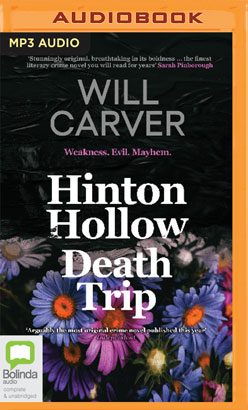 Five days in the history of a small rural town, visited and infected by darkness, are recounted by Evil itself. A stunning high-concept thriller from the bestselling author of Good Samaritans and Nothing Important Happened Today.

“Cements Carver as one of the most exciting authors in Britain. After this, he'll have his own cult following” Daily Express

It's a small story. A small town with small lives that you would never have heard about if none of this had happened.

Little Henry Wallace was eight years old and one hundred miles from home before anyone talked to him. His mother placed him on a train with a label around his neck, asking for him to be kept safe for a week, kept away from Hinton Hollow.

Because something was coming.

Narrated by Evil itself, Hinton Hollow Death Trip recounts five days in the history of this small rural town, when darkness paid a visit and infected its residents. A visit that made them act in unnatural ways. Prodding at their insecurities. Nudging at their secrets and desires. Coaxing out the malevolence suppressed within them. Showing their true selves.

Detective Sergeant Pace had returned to his childhood home. To escape the things he had done in the city. To go back to something simple. But he was not alone. Evil had a plan.