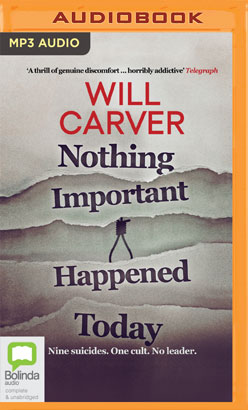 When strangers take part in a series of group suicides, everything suggests that a cult is to blame. How do you stop a cult when nobody knows they are a member?

‘Arguably the most original crime novel published this year’ Independent

Nine suicides
One Cult
No leader

Nine people arrive one night on Chelsea Bridge. They’ve never met. But at the same time, they run, and leap to their deaths. Each of them received a letter in the post that morning, a pre-written suicide note, and a page containing only four words: Nothing important happened today.

That is how they knew they had been chosen to become a part of the People Of Choice: A mysterious suicide cult whose members have no knowledge of one another.

Thirty-two people on that train witness the event. Two of them will be next. By the morning, People Of Choice are appearing around the globe; it becomes a movement. A social media page that has lain dormant for four years suddenly has thousands of followers. The police are under pressure to find a link between the cult members, to locate a leader that does not seem to exist.

How do you stop a cult when nobody knows they are a member?

‘Cements Carver as one of the most exciting authors in Britain. After this, he’ll have his own cult following’ Daily Express

‘This book is most memorable for its unrepentant darkness…’ Telegraph

‘Unlike anything else you’ll read this year’ Heat