Grunts in Trouble, The 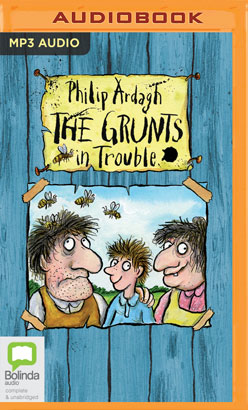 Grunts in Trouble, The

The first in the hilarious series from Roald Dahl Funny Prize winning author Philip Ardagh and illustrator of The Gruffalo, Axel Scheffler.

Mr and Mrs Grunt, who are neither clean nor clever, live with their adopted in fact, abducted son, Sunny, in a donkey-drawn caravan somewhere or other at some time that is a bit like now but not exactly now. Sunny is an oddlooking boy, what with his left ear being higher than his right ear and that kind of sticky-up hair which NEVER goes flat, even if you massage glue into it and then jump on it. Together the unusual family find themselves in frankly improbable but very funny adventures involving bendy railings, double-barrelled shotguns, full-fat yoghurt and, always, a beard of bees.