Fart Monster and Me: The Audio Collection 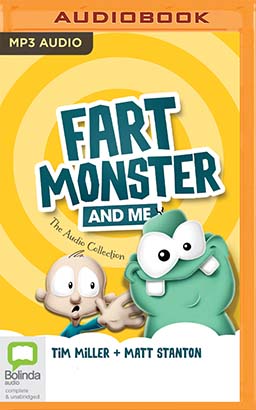 Fart Monster and Me: The Audio Collection

All four books from the hilarious Fart Monster and Me series!

The Crash Landing: Is it a bird? Is it a plane? Are those clouds shaped like bottoms?! Nothing exciting has ever happened in Ben Dugan's backyard. That is, until something crash-lands from the biggest and smelliest storm cloud in the sky! In one split second, Ben's life changes forever ...

The New School: Stone Beach Primary is not ready for Ben Dugan and his new best friend. Ben's about to start at his new school and the fart monster's coming along for the ride.

The Birthday Party: Birthday parties should be fun, not smelly. Too bad the fart monster doesn't know that ... Ben's been invited to a birthday party and the whole class is there, including the fart monster. There are plenty of party games and ... a terrible smell.

The Class Excursion: That's what Uranus looks like? It's not shaped like a butt! Ben's class is off to the new space exhibit. When the two friends find an empty space shuttle, is this their chance to visit the fart monster's home – Planet Let 'er Rip!