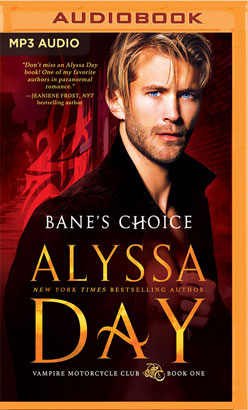 Bane lost his humanity ages ago. Nothing is more important than protecting his Vampire Motorcycle Club from the death magic invading his territory. The most ancient of vampires, he seeks cold, unfeeling, bloody vengeance...until a frustratingly sexy human doctor is thrust into his path. She tempts Bane to distraction. And distraction is deadly in his world.

Buttoned-up and meticulous Dr. Ryan St. Cloud never thought she’d find herself in the mix of a motorcycle club, let alone one full of terrifyingly badass vampires. Or how intrigued she is by their dark and enigmatic leader, who seems balanced on the knife’s edge of killing her...or claiming her.

But Bane’s choice is harder than it seems, because when that danger hits too close to home, he’s forced to choose between her life and everyone else’s…