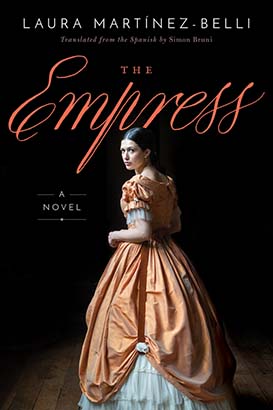 From a bestselling author in Mexico comes her English-language debut—an enthralling historical novel about the tragic reign of Empress Carlota of Mexico.

It’s 1863. Napoleon III has installed a foreign monarch in Mexico to squash the current regime. Maximilian von Habsburg of Austria accepts the emperor’s crown. But it is his wife, the brilliant and ambitious Princess Charlotte, who throws herself passionately into the role. Known to the people as Empress Carlota, she rules deftly from behind the scenes while her husband contents himself with philandering and decorating the palace.

But Carlota bears a guilty secret. Trapped in a loveless marriage, she’s thrown herself into a reckless affair. Desire has blinded Carlota to its consequences, for it has left her vulnerable to her sole trusted confidante. Carlota’s devious lady-in-waiting has political beliefs of her own—and they are strong enough to cause her to betray the empress and join a plot to depose her from the throne. As Carlota grows increasingly, maddeningly defenseless, both her own fate and that of the empire are at stake.

A sweeping historical novel of forbidden love, dangerous secrets, courtly intrigue, and treachery, The Empress passionately reimagines the tragic romance and ill-fated reign of the most unforgettable royal couple of nineteenth-century Europe during the last throes of the Second Empire.