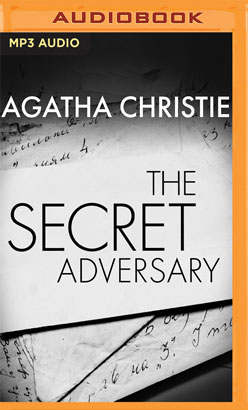 Tommy Beresford and Prudence "Tuppence" Cowley are young, in love...and flat broke. Just after Great War, there are few jobs available, and the couple is desperately short of money. Restless for excitement, they decide to embark on a daring business scheme: Young Adventurers Ltd. - "willing to do anything, go anywhere". Hiring themselves out proves to be a smart move for the couple. In her first assignment for the mysterious Mr. Whittingtont, all Tuppence has to do in her first job is take an all-expense paid trip to Paris and pose as an American named Jane Finn. But with the assignment comes a bribe to keep quiet, a threat to her life, and the disappearance of her new employer. Now her newest job is playing detective.

Where is the real Jane Finn? The mere mention of her name produces a very strange reaction all over London. So strange, in fact, that they decided to find this mysterious missing lady. She has been missing for five years. And neither her body nor the secret documents she was carrying have ever been found. Now post-war England's economic recovery depends on finding her and getting the papers back. But the two young working undercover agents for the British ministry know only that her name and the only photo of her is in the hands of her rich American cousin. It isn't long before they find themselves plunged into more danger than they ever could have imagined - a danger that could put an abrupt end to their business...and their lives.