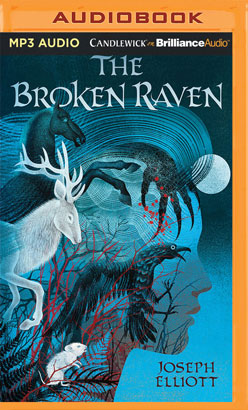 In the heart-pounding second book in the Shadow Skye trilogy, unlikely heroes Agatha and Jaime must fight for their clan’s home when a new danger comes to the Isle of Skye.

After their escape from Norveg, Agatha and Jaime return with their clan to the Isle of Skye to find that their enclave is now in the hands of the treacherous people of Raasay. They find tenuous shelter with another clan, but disaster soon strikes when the terrifying shadow creatures known as sgàilean escape their magical prison and wreak havoc across the island. Now Agatha and Jaime must call on old and new allies to fight this threat. In the meantime, a ship from Norveg sails for the court of King Edmund of Ingland, where a dangerous alliance is forming, and Sigrid, a girl with an extraordinary memory, works to free herself from the clutches of a cruel king. All three protagonists must summon their particular powers to save the island from the horde of dark creatures and foil the plans of two vengeful monarchs.

Kirkus Reviews called The Good Hawk “a page-turning adventure” and Agatha an “original protagonist.” This second book in the Shadow Skye trilogy continues to expand the definition of hero as its neurodiverse heroine tackles ever greater challenges in a thrilling middle act to the battle over the fate of Scotia.