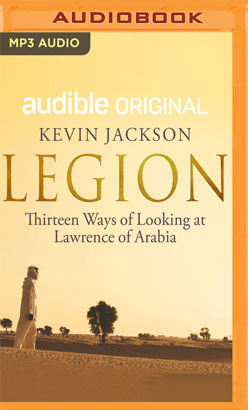 Thirteen Ways of Looking at Lawrence of Arabia

There have been literally hundreds of books about T. E. Lawrence, best known as Lawrence of Arabia, but never a work quite like Legion.

Legion tells the astonishing life story of an man who was far more than a war hero; for Lawrence was also an archaeologist, a linguist and translator, a historian and classicist, a marine engineer, an airman and one of the great English writers of the 20th century.

He was also an enigma, even at times to himself, tormented by guilt and shame, by his masochism, self-loathing and his fear of his own sexuality.

Legion unearths not only a trove of little-known facts and stories about Lawrence's life, but also the fascinating details of what he has meant to many people, both in his lifetime and ever since.

He has been hailed as the last romantic hero, despised as an agent of imperialism, blamed for the disasters of Middle Eastern politics and admired as a genius by countless eminent people - from statesmen such as Winston Churchill and Andre Malraux, to writers such as E. M. Forster and George Bernard Shaw. And, of course, he found a new form of immortality in David Lean's masterpiece Lawrence of Arabia.

Legion argues that Lawrence's true genius lies not in any one of his remarkable astonishments, but in their totality. Its novel approach to the hero will delight his many fans and surprise and enlighten those who know nothing of him save the popular myth.