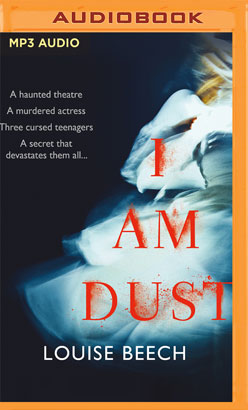 When iconic musical Dust is revived 20 years after the leading actress was murdered in her dressing room, a series of eerie events haunts the new cast in a bewitching, beguiling and terrifyingly dark psychological thriller.

The Dean Wilson Theatre is believed to be haunted by a long-dead actress, singing her last song, waiting for her final cue, looking for her killer.

Now Dust, the iconic musical, is returning after 20 years. But who will be brave enough to take on the role of ghostly goddess Esme Black, last played by Morgan Miller, who was murdered in her dressing room?

Theatre usher Chloe Dee is caught up in the spectacle. As the new actors arrive, including an unexpected face from her past, everything changes. Are the eerie sounds and sightings backstage real or just her imagination? Is someone playing games?