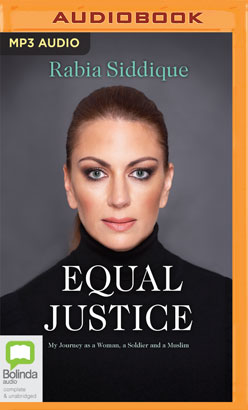 My Journey as a Woman, a Soldier and a Muslim

As the daughter of an Indian Muslim father and a white Australian mother, growing up in the conservative environment of 1970s Perth, Rabia Siddique was always going to be marked as different. Escaping her traumatic childhood, Rabia moved to London after graduating from law school to pursue her passionate commitment to social justice. She joined the British Army as a military lawyer just days after 9/11, finally finding herself stationed in Southern Iraq.

On 19 September 2005, Rabia and another soldier were taken hostage by Islamic insurgents as they tried to negotiate the release of two kidnapped British SAS operatives. She battled for hours to save their lives, using her legal expertise, knowledge of Islam and Arabic to negotiate with their captors as a violent mob tried to storm the compound where she was being held. After their release, her colleague received a Military Cross, while Rabia received nothing. Her subsequent sex and race discrimination case against the British Army made headlines around the world.

Her memoir is a story of grit, courage and conviction, born out of a unique perspective.