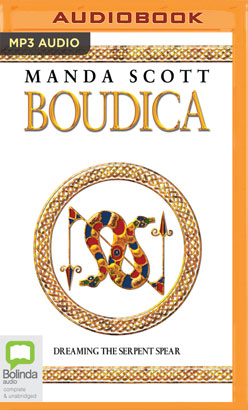 Dreaming the Serpent Spear is the magnificent final story of the world’s most famous warrior queen in in Manda Scott’s best-selling Boudica series.

Britannia, AD 60: The tribes of Britannia are ready to seek bloody vengeance. Twenty thousand warriors are poised to reclaim their land from their captors.

Now is their chance: the Roman governor has marched his legions west, leaving his capital and a vital port undefended. There is no going back.

But to crush her enemies for all time, the Boudica must do more than lead her army in the greatest rebellion Britain has ever known. She must find healing for herself, for the land - and for Graine, her eight-year-old daughter.

Colchester is burning. London has been destroyed. Amidst fire and bloody revolution, the Boudica and those around her must fight to keep what matters most - now and for all time.