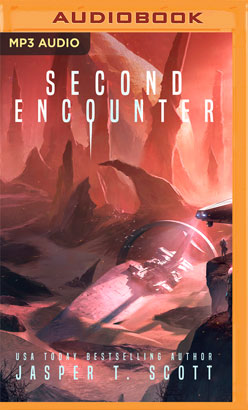 Comes the stunning conclusion of the Ascension Wars series....

The Road to Salvation Is Paved in Blood

With a fragile peace established in the Enclave between humans and Chimeras, both species must learn to put aside their differences to ensure their continued survival. But racial tensions are simmering just beneath the surface, ready to explode.

Meanwhile, Clayton and Samara's daughter, Dora, might be the answer that everyone is looking for: her immunity to both strains of the Chimeran virus could soon lead to a cure, making it possible to establish new settlements beyond the Enclave.

Mysteriously, the Kyra's reinforcements never arrived to blockade and quarantine Earth. Clayton worries that it's because the Kyra are losing the war to the Chrona. He's no friend of either side, but the Kyra might actually be the lesser evil. He wants to take the Enclave's stolen transport beyond Earth to learn what's going on. Yet, when Clayton learns of a sinister plot within the Enclave that directly threatens his family, he's forced to execute his plans early.

With old enemies lurking in the shadows, nothing goes as planned, and little does Clayton know, the revelations waiting beyond Earth are far more shocking than he ever could have imagined....