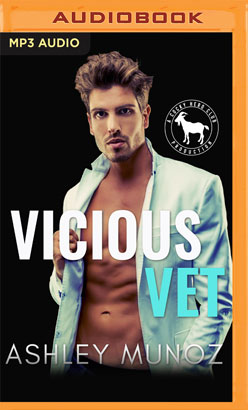 I never imagined that I'd be adding "manager of operations for Park Street Animal Shelter" to my resume. Not until my firm closed up, my boss moved away, and I was asked, nearly begged, to step in and help. I'd do about anything for my old boss and friend, and since I wasn't offered a spot with the firm when they moved, I needed something to keep me surviving here in Temecula, California.

Once I found a decent allergy medication and adjusted to the smell that accompanied the shelter, I was oddly excited to start my new venture.

That is until I met our on-call veterinarian.

I can put up a good fight, always have, but against Greyson; I've always been flustered, irritated...weak.

Especially after what happened.

Four years I've managed to avoid him. I've stayed on my side of town with my head down, and now he's here...and I can't escape him.

Some men are cordial, kind, professional...but Greyson Knox is nothing but a vicious vet looking to score.

My first order of business was to strip him of his job, get him out of my clinic. But like everything between us, it turned into a war.

Except for this time, losing would strip me of something I never expected to have. Something I've been too afraid to want, and when Greyson plays dirty by revealing a secret he's been harboring, my battle lines grow weak, leaving me vulnerable for attack.