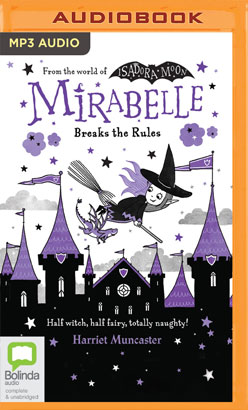 Mirabelle Breaks the Rules is the second in the series of chapter stories from bestselling author Harriet Muncaster introduces Isadora Moon's cousin, Mirabelle!

Mirabelle is special because she is different. Mirabelle's mum is a witch, her dad is a fairy and she is a bit of both.

When Mirabelle goes off to witch school she promises not to cause any mischief ... but then potions class goes a bit wrong and flying practise is a disaster.

Soon enough, Mirabelle finds herself getting up to some seriously mischievous behaviour. Hopefully, with the help of her best friend, Carlotta, she can put everything right before home time.