He Knows Your Secrets 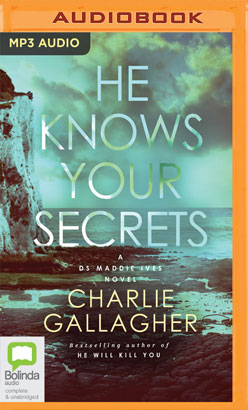 He Knows Your Secrets

He Knows Your Secrets is an absolutely gripping crime thriller with a massive twist from the bestselling author Charlie Gallagher's Detective Maddie Ives series.

Three Women. One will sacrifice her life to stop him. One is his next victim. One must try to put him behind bars. Holly Maguire takes a taxi to a clifftop location. She is determined to make things right. Then the car goes over the edge of the cliff. As Holly falls to her death, she tightens her grip on a rucksack. She will give her life to bring him down.

Kelly Dale wakes up to her first day without her mother. Her mum passed away late the previous night after losing a battle with cancer. Kelly receives a text from Holly, sent just before the accident and rushes to the clifftop. She is too late. Kelly has lost her mother and girlfriend in the space of a few hours. Now she must face her own battle to stay alive. He will kill Kelly next. He wants to live-stream her murder.

Detective Maddie Ives is called out to inspect the wrecked vehicle. She is under pressure to write it off as a murder-suicide or a terrible accident. Holly was a known sex worker and the running theory is that she may have been engaged in activity with the taxi driver when it rolled over the side. Maddie doesn’t buy it. Holly’s rucksack contains seemingly random and worthless items but Maddie quickly finds numerous links to a crime boss. Maddie must stop a powerful man who exploits and control women. It’s a tense and thrilling ride as the net closes in. But time is running out to save Kelly.