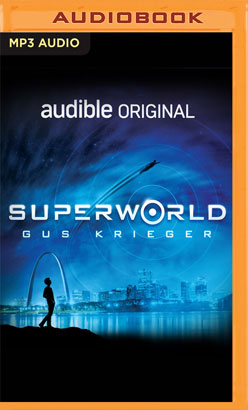 Earth, 2038. Every single man, woman, and child on the planet has a unique gift: an extraordinary, superhuman ability.

And he may be civilization's only hope.

Ignatius Lohman longs to make his mark, to be someone. But in a world populated entirely by superpowered beings, he's nothing but a powerless white-collar civilian. Iggy's plight is not helped by the fact that his father, General Lancelot Lohman of the defense agency PEERLESS, is one of the most powerful men on the planet.

Then, suddenly and unexpectedly, Iggy finds himself in the crosshairs of Erle P. Van Owen, a megalomaniacal corporate overlord with the astonishing ability to neutralize any superpower.

Van Owen is seemingly invincible. But he didn't count on this: If he can effortlessly defeat anyone with superhuman abilities, how will he fare against the one person with no powers at all?

Teaming up with his father and their PEERLESS allies, Iggy must find a way to save the United Nations of Earth. And maybe, with a bit of luck, find himself along the way.