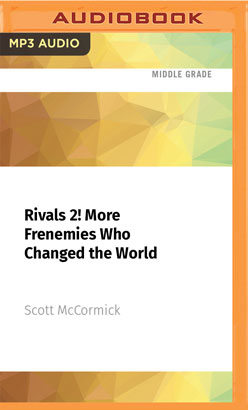 More Frenemies Who Changed the World

Hilarious history for ages eight and up.

Fasten your falx knives and grab the reins of your quadriga: Rivals 2! More Frenemies Who Changed the World is the funniest look at people who benefited the world through their hatred.

Hear how the rivalry between Edison and Tesla literally changed the course of electricity, how sports fans nearly toppled the Roman Empire, how geniuses Chanel and Schiaparelli empowered women worldwide and had the greatest rivalry that wasn't, and how the feud between Joe Frazier and Muhammad Ali was so intense more people tuned in to their fight than watched Neil Armstrong set foot on the moon two years earlier.

This audiobook has it all: death beams, chariot races, flaming costumes, ear-munchers, party fleas, and whatever the opposite of epic poetry is.... No fact is too bizarre, no segue too surreal, and no sequitur is too non for this riotous sequel.