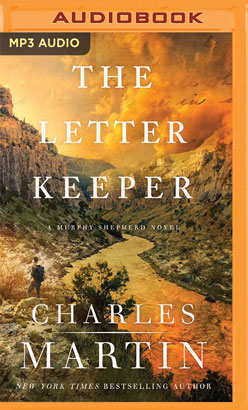 He shows up when all hope is lost.

Murphy Shepherd has made a career of finding those no one else could—survivors of human trafficking. His life’s mission is helping others find freedom.

Then the nightmare strikes too close to home.

When his new wife, her daughter, and two other teenage girls are stolen, Murphy is left questioning all he has thought to be true. With more dead ends than leads, he has no idea how to find his loved ones.

After everything is stripped away, love is what remains.

Hope feels lost, but Murphy is willing to expend his last breath trying to bring them home.

Praise for The Letter Keeper:

“Very few contemporary novelists have found acclaim within mainstream and evangelical markets, but Charles Martin is among them. His latest novel is both a stand-alone story and a sequel to his highly-praised The Water Keeper. It hinges on the Scriptural message of forsaking the found in order to seek the lost, a theme Martin brings to poetic and brilliant life. A man broken by events beyond his control accepts the challenge to walk dark ways in order to bring the lost and helpless home, but he comes close to losing himself in the process. Despite the hardship and heartache, Martin’s story shines with the light of eternal hope.” —Davis Bunn, writing for Christianity Today