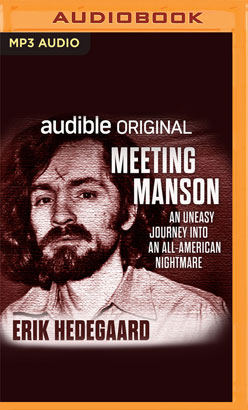 An Uneasy Journey into an All-American Nightmare

But the story he wrote for RS in 2013 didn't begin to capture the strange and lingering effect Manson would have on his life.

Now, in this Audible Original, you'll hear about the making of that story, including audio of the phone calls Hedegaard received from Manson on a regular basis, interviews he conducted with Los Angeles District Attorney Vincent Bugliosi, as well as conversations he had with Manson Family members including Bobby Beausoleil, Lynette "Squeaky" Fromme, and then-Manson-girlfriend Afton Elaine Burton. Hedegaard revisits Manson's forgotten career as a musician, Rolling Stone's own history in mythologizing Manson “as the most dangerous man on earth”, and the various theories as to why so many “lost girls” found themselves in Charlie's web and committed such brutal acts of violence.

But what makes Meeting Manson a remarkably different listen is the pain and vulnerability that Hedegaard reveals after Manson touches him on the arm. Hedegaard bravely explores how he felt both pleased and haunted by the touch of a mass murderer - and how it even changed his life. For a time.

Fifty years after one of the most senseless crime in history, hear one of America's best storytellers share a Manson narrative unlike any you've ever heard before.