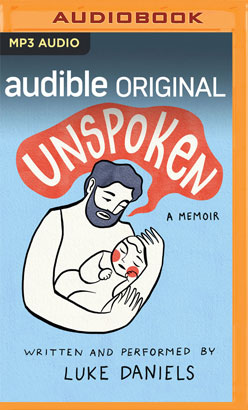 Beloved sci-fi narrator Luke Daniels feels a little exposed right now. Up until now, words have never been in short supply. However, by and large, this unending tide of words has been someone else's. In real life he's an introvert who seriously doesn't even talk much, preferring to observe and mimic. That's his comfort zone. But Luke's own personal story? That's his danger zone. And frankly, he's terrified.

But this story deserves to be told as much as it needs to be heard. So here we go.

In 2016, the morning after Valentine's Day, Luke's son passed away from breathing issues complicated by congenital birth defects. He was 21 months old. And his name was Finnegan.

This kind of loss is terrifyingly huge and scary, but the love and light in this story far outweigh the tragedy. Through comic-book metaphors, Shakespeare references, and lilting Irish brogues, Luke tells the story of his too-short time with Finn. This is his tribute to storytelling, parenthood, and his rosy-cheeked, blue-eyed baby boy.