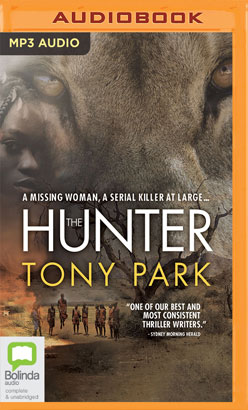 The Hunter by Tony Park, the author of Red Earth, is a full-throttle international thriller that will engross fans of Clive Cussler.

Safari guide and private investigator Hudson Brand hunts people, not animals. He's on the trail of Linley Brown who's been named as the beneficiary of a life insurance policy.

Linley's friend, Kate, supposedly died in a fiery car accident in Zimbabwe, but Kate's sister wants to believe it is an elaborate fraud.

South African detective Sannie van Rensburg is also looking for Linley, as well as a serial killer who has been murdering prostitutes on Sannie's watch. Top of her list of suspects is Hudson Brand.

Sannie and Hudson cross paths and swords as they track the elusive Linley from South Africa and Zimbabwe to the wilds of Kenya's Masai Mara game reserve.

Tony Park's trademark storytelling prowess turns this hunt into a thrilling - and deadly - escapade through some of the most dangerous, yet beautiful, places on earth.