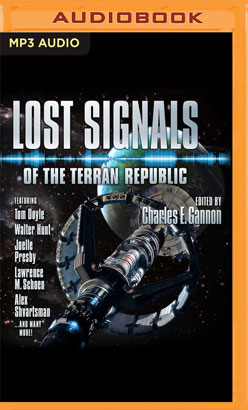 Welcome to the 22nd century!

Ever-turbulent humanity has reached out to the stars and found itself challenged by several “exosapient” species whose motivations are as unusual as their physical forms. Troubleshooters like Caine Riordan must contend with both humans and aliens during this epic plunge into the high-stakes exploration, statecraft, and warfare that churn and change our post-contact world.

But no world is defined just by the characters who occupy center stage. Lost Signals digs deep into the lives - and struggles - of those beyond the spotlight by bringing together 20 new voices and new stories in a format that blurs the line between fact and fiction in the Consolidated Terran Republic.