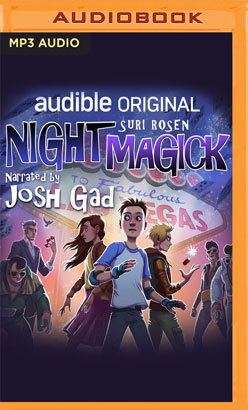 Cole Balek is a liar.

Okay, not really. He just makes you think he's sawing someone in half or that he's trapped in a trunk. All Cole wants is to continue the love of magic that he and his late father shared by becoming the best tween magician in the Las Vegas area.

But when Cole and his mother get a mysterious note from a rare book collector, he's forced to search among his father's belongings for A Lesson in Magick, an old book of spells connected to an ancient group of magickers. What he finds instead are a series of coded clues his dad left for him - clues that send Cole and his best friends Ethan and Sanchez on a wild scavenger hunt throughout Las Vegas, in search of A Lesson in Magick. Cole must use every hack and magic trick he's got, because he knows that if the book falls into the wrong hands, disaster will strike.

As danger mounts, who can this clever, funny, and determined group of friends really trust in a world filled with professional magicians, strange professors, and scary Elvis impersonators?