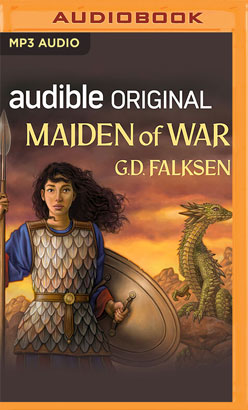 A routine mission finds one girl and her fellow warriors fighting for their lives in this action-packed adventure, the first in a new fantasy series perfect for fans of Pierce Brown and Sabaa Tahir.

“If you've been looking in vain for a rich story about kickass warrior women, your search has ended. G.D. Falksen's MAIDEN OF WAR is the candy your ears are hungry for.” (Yuri Lowenthal, actor (Spider-Man, Naruto, Prince of Persia))

When their Republic was ravaged by plague and fell into chaos, a monastic order of girls called the Daughters of Zahra took up arms and became known as Warmaidens. Fifty years later, the plague has passed, and the Republic survived, but the Warmaidens live on, training for battle since childhood and providing protection to their communities.

When a threat surfaces from the north - a warlord who has proclaimed himself a living god - Roxshana and her Warmaiden sisters embark on an expedition to bolster the northern kingdom. Their expectations of a routine mission are immediately dashed as they find themselves under attack at every turn. Encountering pirates, a dragon, an army, and her own surprising feelings for the northern kingdom's prince, Roxshana fights for the fate of the Republic...even as misgivings haunt her.

Are Roxshana and her sisters on the right side of history, or are they merely pawns in a sinister political game?