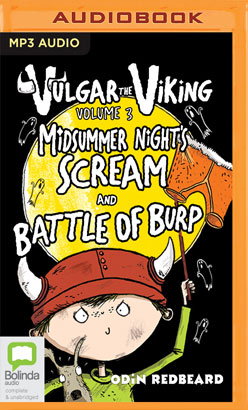 Vulgar the Viking and a Midsummer Night's Scream: Vulgar thinks Midsummer Night's Eve is the best viking festival of all! There'll be a massive bonfire and everyone will sing songs about excellent longboats and enormous battles, then eat and drink until their stomachs explode! So what's with the tiny pile of firewood? And the maypole he's told to dance around? With Freya! No Way!. Vulgar vows to make this Midsummer's Eve a night Blubber will remember for ever. It's going to be a scream.

Vulgar the Viking and the Battle of Burp: Vulgar can't believe his luck. He's going on a school trip in a real, live longboat, with oars and everything! And they're going to visit Burp, where a long-ago battle once took place between the Vikings and the, er, Burpers. It was a mighty battle, which the Vikings totally lost. But this time, Vulgar's going to re-write history. He's up for a bit of historical re-enactment and is sure, one way or another, that a great and noble victory will be his!