Something About a Soldier 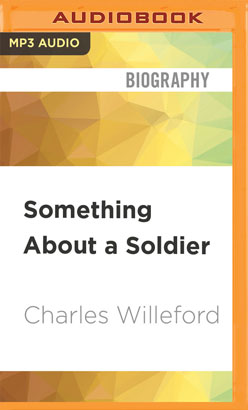 Something About a Soldier

This funny, rich, raunchy autobiography re-creates the adventures of a very young soldier in the US Army at the height of the Depression. Charles Willeford was 16 in 1935 when he signed up and was sent to the Philippines. And the Philippines of those days was like a place out of another century. Willeford's job was to fuel aircraft whose pilots treated him and his buddies almost like slaves. At night, however, he was a lord, fully exploring a great, timeless, and sensual city with a multitude of women available - even on a private's pay.

While still in his teens, Charles Willeford had an artist's eye for the interesting detail, and he recalls here, with telling effect, the hardest of times and introduces the listener to the unusual companions he met along the way. He also initiates the listener into an exotic, leisurely way of life that will never be seen again in or out of the armed services.

Willeford wanted to leave the army after his tour of duty, but there were still no jobs, and he reenlisted, this time in the cavalry in California, where he learned about horses the army way.

Perfect in its description of an often brutish way of life - and the colorful mingling of unfettered boys, bitter old men, and even intellectuals - Something About a Solider is a rare portrait of a vanished army.