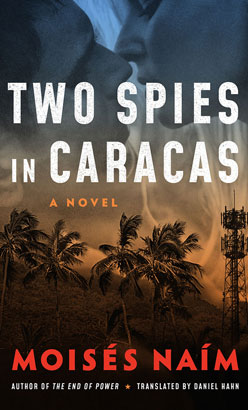 From the New York Times bestselling author of The End of Power comes an edge-of-your-seat political thriller about rival spies, dangerous love, and one of history’s most devastating revolutions.

Venezuela, 1992. Unknown colonel Hugo Chávez stages an ill-fated coup against a corrupt government, igniting the passions of Venezuela’s poor and catapulting the oil-rich country to international attention. For two rival spies hurriedly dispatched to Caracas—one from Washington, DC, and the other from Fidel Castro’s Cuba—this is a career-defining mission.

Smooth-talking Iván Rincón of Cuba’s Intelligence Directorate needs a rebel ally to secure the future of his own country. His job: support Chávez and the revolution by rallying the militants and neutralizing any opposing agents.

Meanwhile, the CIA’s Cristina Garza will do everything in her power to cut Chávez’s influence short. Her priority: stabilize the greatest oil reserves on the planet by ferreting out and eliminating Cuba’s principal operative.

As Chávez surges to power, Iván and Cristina are caught in the fallout of a toxic political time bomb: an intrepid female reporter and unwitting informant, a drug lord and key architect in Chávez’s rise, and personal entanglements between the spies themselves. With everything at stake, the adversaries find themselves at the center of a game of espionage, seduction, murder, and shifting alliances playing out against the precarious backdrop of a nation in free fall. A thrilling fictional story based on unimaginable real-life events.