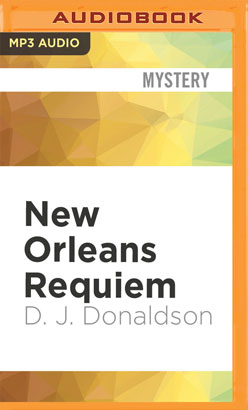 Andy Broussard, the plump and proud New Orleans medical examiner, obviously loves food. Less apparent to the casual observer is his hatred of murderers. Together with his gorgeous sidekick, psychologist Kit Franklyn, the two make a powerful, although improbable, mystery solving duo.

It's a bizarre case for Andy and Kit. A man is found in Jackson Square, stabbed, one eyelid removed and four Scrabble tiles with the letters KOJE on his chest. Soon, there’s a second victim, also stabbed and missing one eyelid, but this time with only three letters on his chest, KOJ. The pattern is unmistakable, but does it mean there will be two more victims and then the killer will go away, or is he leading up to something bigger and deadlier? Broussard and Kit use their disciplines to profile the killer, but it soon becomes clear that the clues and objects they’ve found are part of a sick game that the killer is playing with Broussard; a game most likely engineered by one of the hundreds of attendees at the annual forensics meeting being held in New Orleans. Has Broussard finally met his match?

New Orleans Requiem is written in Donaldson's unique style: A hard-hitting, punchy, action-packed prose that’s dripping with a folksy, decidedly southern, sense of irony. Add in Donaldson's brilliant first-hand knowledge of forensics and the sultry flavor of New Orleans, and the result is first class forensic procedural within an irresistibly delectable mystery.