Tragedy of Rudy Giuliani, The 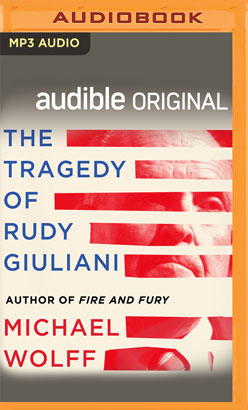 Tragedy of Rudy Giuliani, The

From Michael Wolff, author of the explosive, number one best seller Fire and Fury, comes the mesmerizing story behind the most bizarre melt-down in recent American political history.

The decline and fall of Rudy Giuliani, from “America's Mayor” to public spectacle, has all the makings of a modern Shakespearean tragedy. Those who know Giuliani, whose tough leadership and even tougher politics helped revitalize New York City in the 1990s and lead the country through 9/11, have stood by and watched with incredulity as he put himself at the heart of impeachment charges against the President.

In The Tragedy of Rudy Giuliani, Michael Wolff uncovers just what happened to the iconoclastic former mayor, and reveals how his apparent self-destruction frames some of the great political questions of the age: How have evidently unstable people come to have such success in institutional politics? How have the mean and nasty achieved such heights in a system that has valued – insisted on – likeability and conventionality?