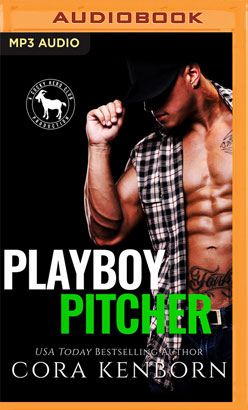 The first time I met Benson LaCroix, he sat in a bar wearing “cocky player” like a cheap cologne. The second time, he stood in a locker room in nothing but a jockstrap and a scowl. Apparently, the Miami Storm's star pitcher isn't too thrilled his new boss is the woman who turned him down.

That makes two of us.

I never asked to inherit my father's baseball team. It's the one thing I despised more than him. I'm just here to sell, sign on the dotted line, and get out.

Enter Satan - otherwise known as my ex. I should swallow my pride and just accept his offer. Instead, I tell him where to shove it.

It can't be that hard to turn the major league's biggest joke into a winning team.

With only four weeks to do the impossible, I'll need more than a miracle. I'll need a secret weapon. Someone ruthless enough to marry me for my money. Like a playboy pitcher with a wicked curveball.

Two quickie vows and one hostile truce later, and it's game on.

Ben and I can do this. I just have to keep my eye on his balls. I mean the ball. The prize.