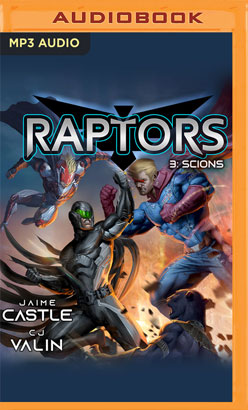 As you should know by now (it's book three after all!), my name is Sawyer William Vincent, and I'm Red Raptor.

The world as we know it has pretty much ended.

Imagine your least favorite class from school. The one you hate showing up to because you can't stand the teacher - and maybe the feeling is mutual, even though they can't admit it. You hate the subject, and you're miserable the entire period, every day, every second. None of your friends are there, and even if they are, you can't hang with them.

You just sit and do your work. No talking. No bathroom breaks. No moving at all. Just book work and worksheets. Or workbooks. Whatever, you get what I mean.

Now, imagine that the class has several aggressively strict teachers, and those teachers have superpowers. In fact, they're the most powerful people on the planet. And the class lasts 24/7.

Is your gut clenched yet? Do you have that feeling of overwhelming panic? Good. Because that's all of us now, all the time.

We have no idea what's going on, but as usual, we've gotta figure it out.

Oh, and this time, Frank - FD3 himself - is gonna help tell the story along with Osprey and me. Isn't that awesome?

If you like Tim Drake as Robin or ever wondered what Peter Parker would be like if he lived in Gotham, Raptors is right up your alley.

From number-one Audible best-selling authors Jaime Castle and CJ Valin comes a new superhero universe, perfect for fans of both DC and Marvel.

Actually, it's for fans of anything superhero-related. You're gonna like it. Promise.