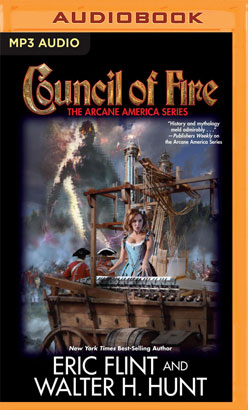 Kraken in the Atlantic, revenants in Jamaica, Dry Hands and Floating Heads in the Hudson valley, African ogres and worse set loose in the streets of New York. Magic of all kinds, emerging everywhere, most of it poorly if at all controlled.

The powerful Iroquois Confederacy disintegrates. The Onondaga Council Fire is extinguished; the Seneca and Cayuga follow their own shaman and war leader, and the Mohawks ally with the English.

For their part, the English and the French in North America, who had been on the brink of war when the Sundering came, now have to contemplate what would once have been unthinkable. They must not simply forge a military alliance against the rising dark powers but may even have to unite politically behind the young English prince Edward, now the only person of royal blood left in the terrifying world created by the Sundering.

At the publisher's request, this title is sold without DRM (Digital Rights Management)/

“[R]eads like a technothriller set in the age of the Medicis.” (Publishers Weekly)

"A compelling and immersive novel in which every word feels authentic and every chapter draws the reader deeper into the dark and terrifying power of the mind.” (New York Journal of Books)