How to be a Human 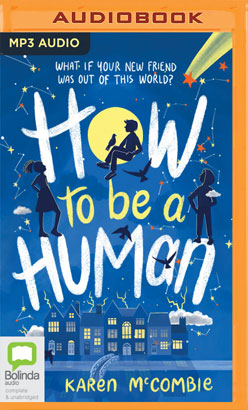 How to be a Human

How To Be A Human is a warm and otherworldly story about finding friendship in the most unlikely of places from highly-acclaimed and much-loved children's author Karen McCombie.

Who said friends have to match to matter?

When the Star Boy’s space-pod crashes in the grounds of Fairfield Academy he knows he must seek shelter. Taking refuge in the school’s boiler room to await rescue he discovers that the room’s small window is the perfect place to watch humans go by.

The Star Boy knows about humans from his Earth lessons but no one from his planet has ever studied them up close. Now he has the perfect opportunity. There are two humans in particular that catch his attention – a boy called Wes and a girl named Kiki. But as his curiosity grows so does his courage and, making a momentous decision, the Star Boy follows Wes and Kiki into class … and into their lives.