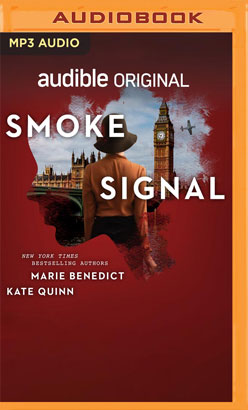 Best-selling authors Marie Benedict (The Mystery of Mrs. Christie) and Kate Quinn (The Rose Code) join forces to tell the captivating story of how history's most famous mystery writer crossed paths with one of Britain's top-secret codebreakers in the throes of World War II.

Recruited as a codebreaker of enemy ciphers, ex-debutante Osla Kendall spends her days translating Axis military messages and her nights reading mystery novels. When Osla gets her hands on Agatha Christie's most recent work, N or M?, a mysterious signal within its pages catches her eye, and she and her eccentric book club get in touch with the famous but reclusive writer. Osla's outreach is a welcome distraction for Agatha, who feels restless and underestimated toiling away in a London pharmacy while men like her husband can contribute to the war effort from the frontlines.

So begins the story of an unlikely friendship and the secrets that bind two brave women embroiled in war. Based on true events and told by two beloved authors and champions of history's heroines, Smoke Signal is a breathtaking novella of espionage and the unforgettable women who risked everything to serve their country.