It's in the Action 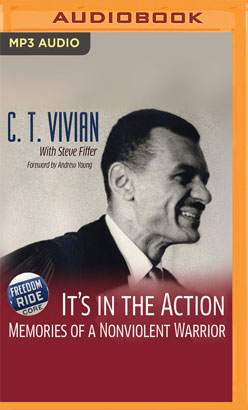 It's in the Action

Memories of a Nonviolent Warrior

The wisdom acquired during C. T. Vivian's lifetime is generously shared in It's In the Action, the civil rights legend's memoir of his early life and time in the civil rights movement. Vivian worked hand in hand with the movement's most famous figures, including Martin Luther King Jr. and John Lewis, and his contributions were no less vital to the successes of nonviolent resistance. Bearing a foreword from Andrew Young, It's in the Action is an important addition to civil rights history from Vivian and coauthor Steve Fiffer.

C. T. Vivian's life was never defined by the discrimination and hardship he faced, although there were many instances of both throughout his lifetime. The late civil rights leader instead focused on his faith in God and his steadfast belief in nonviolence, extending these principles nationwide as a member of the Southern Christian Leadership Conference. It's in the Action contains Vivian's recollections, ranging from finding religion at the young age of five to his imprisonment as part of the Freedom Rides. The late civil rights leader's heart-wrenching and inspiring stories from a lifetime of nonviolent activism come just in time for a new generation of activists, similarly responding to systems of injustice, violence, and oppression. It's in the Action is a record of a life dedicated to selflessness and morality, qualities achieved by Vivian that we can all aspire to.