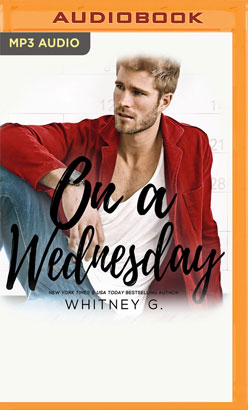 We met on a Wednesday.

Became enemies, then lovers, on a Wednesday.

And we made a final promise before saying good-bye, on a Wednesday....

Kyle Stanton is the cockiest playboy who has ever set foot on this university's campus.

He's also the last person on earth that I want to interview for my senior thesis since:

If I hear him utter the phrase “No need to stare, I'll let you ride it up close and personal, just say the word” one more time, I will scream.

At least, those are my initial impressions until he proposes “a perfect deal” that works in our best interest. Until one filthy kiss changes everything, and he shows me a side of himself that makes me fall in love.

We only have one semester left together, though....

He's bound for the professional football league, and I'm bound for London.

We promise to remain long-distance “friends”, but a brutal argument tears us apart, and we haven't spoken to each other since.

We met on a Wednesday.

Became everything, then nothing, on a Wednesday.

And now he's shown up to my engagement party, all these years later, on a Wednesday....

On a Wednesday is a stand-alone inspired by Adele's “Someone Like You".