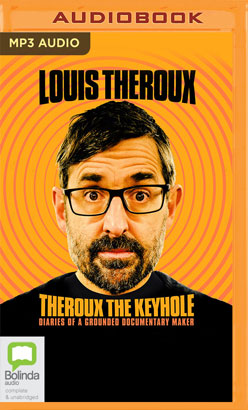 Welcome to Louis Theroux’s house where the much-loved TV documentary-maker, Grounded podcaster and best-selling author of Gotta Get Theroux This finds himself in unexpected danger....

Theroux the Keyhole is an honest, hilarious and ultimately heartwarming diary of the weirdness of family life in Covid World. A wife intolerant of his obsession with Joe Wicks’s daily workouts who also suspects he takes on the cooking less as a way of being helpful and more to avoid child-care. Two teen-aged sons, inseparable from their videogames. A five-year-old happily spamming out videos on his own TikTok account while on holiday with his oblivious family.

Louis also describes how he launches his podcast, Grounded, flies to the US to film a Tiger King documentary and aims his sights on the incarnation of the far right in a world becoming radicalised by social media.